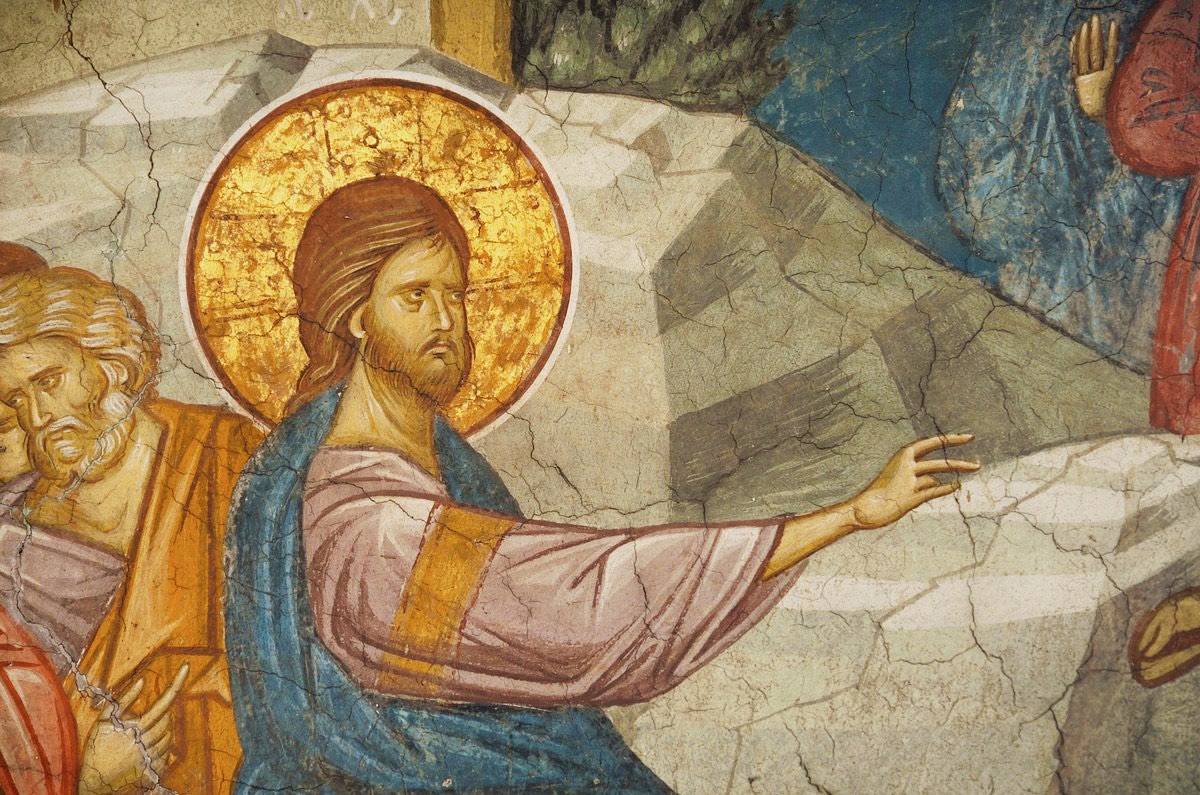 This weekend is an interesting time in the Orthodox Church’s liturgical calendar; we are in a time between Great Lent and Holy Week; it’s a joyous and triumphant time for us that foreshadows the universal resurrection! We celebrate two days called Lazarus Saturday and Palm Sunday. I know many Western Christians celebrate Palm Sunday (I remember our little Assemblies of God church giving all of the kids palms to wave in the air as our pastor would talk about Jesus’ triumphant entry into Jerusalem), but Lazarus Saturday doesn’t exist in the West.

I remember my first Lazarus Saturday. I was a Catechumen at St. Antony’s in Tulsa, preparing to be received into the Orthodox Church on Holy Saturday (the Saturday before Pascha/Easter). I had been attending the parish for a while, loved Orthodoxy and knew I wanted to be a part of the Church. But the beauty of the liturgical year was still something fresh and new to me. My friend Dennis had a connection to St. Lazarus and chose to be christmated that day. So I got up early and went to the church - let’s be honest, it was a Saturday morning, and I was in college, so it probably wasn’t that early - maybe 9:00 am. I went in, and everything was still the Lenten purple, but the parish was bright, and there were several people already there. Don’t get me wrong, of course, I was familiar with the story of Lazarus in Bethany, with Mary and Martha mourning the sadness of his death and the confession of faith from Martha, “Lord, if you had been here, my brother would not have died…But even now I know that whatever you ask from God, God will give you.” (John 11:21-22 ESV). I remembered well that the loss of Lazarus was the one occasion in which the Gospels record ”Jesus wept” (John 11:35). But that was really it for me. Cool story and it showed the power of Jesus.

But then there was this particular Lazarus Saturday. Something was different. I was in the parish, and I listened, I mean I truly listened, to the hymns of the day, and something clicked, something that seems to click as a reminder each and every year for me. This was more than just another miracle of Jesus, more even than Jesus proving that He could raise the dead, which had been seen before (Elijah raising the widow’s son in 3 Kingdoms/1 Kings 17, Elisha raising the Shunamite’s son in 4 Kingdoms/2 Kings 13, and Jesus had even raised the widow’s son in the 7th chapter of the Gospel of St. Luke). Something about this time is different. Christ told those with Him, “I am the resurrection and the life. Whoever believes in me, although he dies, yet shall he live, and everyone who lives and believes in me shall never die” (St. John 11:25:26). Christ confirms the resurrection of all who follow Him, which is why the faithful in the parish were able to sing so triumphantly the Troparion (hymn) of Lazarus Saturday, which has stuck with me as one of my favorite hymns to this day:

O Christ God, when Thou didst raise Lazarus from the dead, before Thy Passion, Thou didst confirm the universal resurrection. Wherefore, we, like children, carry the insignia of triumph and victory and cry to Thee, O Vanquisher of death: Hosanna in the highest. Blessed is He Who cometh in the Name of the Lord.

It was amazing (obviously since I’m writing about how vivid it is in my mind 16 years later). This was a foretaste of the Resurrection, a little Pascha. After this service, Dennis received into the Holy Orthodox Church. He, like Lazarus, was called out by Christ and like Lazarus was given the opportunity to come out of the tomb of the world and live his life anew.

The next day was Palm Sunday. At the end of the liturgy, we all took up palms, waved them and processed around the Church. Since I had missed the Sunday of the Cross during Lent, this was my first procession. As I cried out with the rest of those present, ”Hosanna in the highest! Blessed is He that cometh in the Name of the Lord,” and it was real to me. Something about the preparation of an attempted Lenten fast, the services and readings leading up to this weekend, and being mystically present as Christ raised Lazarus had clicked inside of me, and everything became real.

The weekend of Lazarus Saturday and Palm Sunday grounds me every year, a return to an authenticity of sorts. And the timing is perfect as we head into Holy Week and ultimately, glorious Pascha. Somehow this weekend pulls me out a “head knowledge” of Orthodoxy and helps ground me in a more experiential approach.

On this day in the Holy Orthodox Church, the Saturday before Palm Sunday, we celebrate the Raising of holy and righteous Lazarus of four days, a friend of Christ. Lazarus was beloved of Jesus, as also were his two sisters, Martha and Mary, who were frequent hosts of Jesus, and who served Him much, as evidenced in the Holy Gospels. They lived in the town of Bethany of Judea, just two miles away from Jerusalem. Our Savior summoned His Disciples to go with Him to wake Lazarus from the deep sleep of death. Jesus reached Bethany four days after Lazarus died and was buried. He was aware of the approaching death of Lazarus but deliberately delayed His coming, saying to His disciples at the news of His friend’s death: “For your sake I am glad that I was not there, so that you may believe” (John 11:14). After comforting Martha and Mary, and mourning and weeping at the death of His friend (John 11:35), Jesus went to the tomb and commanded Lazarus to “come forth.” Lazarus emerged, wrapped in grave clothes. Through all of this, our Savior shows His humanity and His divinity in that He will raise the dead as He will raise Himself in the coming days, thus confirming the “universal resurrection.” Ancient accounts relate that Lazarus was 30 years old when Jesus raised him, and he lived another 30 years and died in Cyprus in the year 63. By the intercessions of Thy friend, Lazarus, O Christ God, have mercy on us. Amen.

On this day, Palm Sunday, we celebrate the bright and glorious feast of the Entrance of our Lord Jesus Christ into Jerusalem. After the raising of Lazarus from the dead, many people who witnessed this event believed in Christ. Moreover, a decree was passed by the council of the Jews to have both Christ and Lazarus killed. Therefore, giving place to their wickedness, Jesus withdrew. The Jews, for their part, made plans to kill Him during the Feast of the Passover. Having stayed away for a long time in the wilderness near Ephraim, six days before the Passover Jesus came to Bethany to the house of Lazarus, who had been dead. There at supper, Lazarus ate with Him, and his sister Mary poured ointment on Christ’s feet. Since Lazarus had been raised from the dead, numerous Jews had forsaken the lifeless synagogue and believed in Jesus. In the future, these would be recognized as the first Christians. At this time, the Jews were divided between those who wished Christ dead and were planning His death and those who acknowledged Him as the Messiah. The next day, Jesus sent his Disciples to bring an ass and a colt. And He, who has heaven as a throne, entered Jerusalem seated on a colt. Meanwhile, the children of the Jews spread their garments and branches of trees on the road before Him. Others cut branches and others held them in their hands, going before Him shouting, “Hosanna to the Son of David! Blessed is He who comes in the name of the Lord, the King of Israel!” (John 12:13). This took place because the All-Holy Spirit moved their tongues in praise and exaltation of Christ. By using palms (in Hebrew, the tender branch is called vaion, a palm branch), they were signifying Christ’s imminent victory over death. For it was the custom to honor the victors of contests or battles with triumphal processions and to lead them around with branches from evergreens. The meaning of Hosanna is “Save now, we pray” or “Therefore, save.” The colt prefigured us, the Gentiles. The ass’s colt was still an untamed animal and impure according to the Jewish law. Christ’s sitting and resting on the “Gentiles” showed our taming and obedience to the “law” of the Holy Gospel and Christ as Champion, Victor, and King of all the earth. Today we not only welcome the Lord riding on a colt into the | city of Jerusalem, but Christ who comes in power and glory as King of the age to come. Yet this King comes in meekness and, humility, much different from the triumphal entry of earthly| rulers. The multitudes beheld a man riding an ass’s colt into the earthly city of Jerusalem to be proclaimed “King of the Jews” -| Liberator from the Roman yoke. The Church sees the Son of God, the Prince of Peace, entering the heavenly Jerusalem to establish His eternal reign, after His self-emptying Crucifixion and soul-saving Resurrection. The Prophet Zechariah was speaking about this feast when he said, “Fear not, О daughter of Zion; behold, your King is coming, sitting on an ass’s colt” (Zech. 9:9). And the Holy Prophet David spoke about the children, saying, “Out of the mouths of babes and sucklings. You have perfected praise” (Ps. 8:2). When Christ entered Jerusalem, all the city was in an uproar. In retaliation, the wicked Jewish High Priests instigated the crowds to kill Him. But Jesus evaded them, both hiding and then appearing, speaking to them in parables.